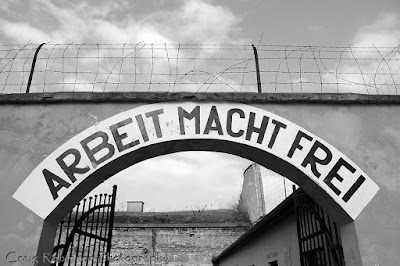 I stepped out of the bus in Terezín on a deceptively sunny winter day. The sky was blue and the sun was shining, then the cold wind whips up and whacks you like a frozen fish to the face. I was about to enter a monument to one of the darkest periods in human history.

It was a brisk -5 C outside and I would spend most of the day outdoors, so I packed my memory cards in a foam case and kept them in my front pocket, hoping that my body heat would keep them warm enough to function. My Nikon will shoot like a trooper down to -20 C with no problems, but the memory cards can freeze up at low temperatures. I carried my SanDisk Extreme III series cards. Those puppies are rated down to -10 or -15.

Terezín, or Theriesenstadt to the Germans, started its life as a fortress built in 1780 by Habsburg emperor Joseph II, who named it after his mother Maria Theresa. What a guy. The Czech territory at that time was part of the Austro-Hungarian Empire, whose main concern in those days was keeping Prussians out of their homes and gardens.

The Prussians never made it to the fortress, which consists of two walled, star-shaped defensive walls with double moat systems and a central citadel. The place moldered away until it became a prison for anyone undesirable to the Austro-Hungarians, including the man who assassinated Franz Ferdinand and started World War I.

After the collapse of the Austro-Hungarian empire, Terezín moldered away for a bit longer until the Nazis occupied the place and found a real dastardly use for it: a concentration camp for Jews and others deemed unworthy by 'the master race.'  Unspeakable horrors took place here, including torture and death from horrible disease. Over 150,000 Jews were sent to Terezín, including 15,000 children. Nazis were real rat bastards.

I walked down the windswept path through the Jewish cemetery which contained mostly unmarked graves, adorned only with small gravestones with numbers and small pebbles and stones laid on them. I'm not sure why Jews lay stones on graves, and Google wasn't much help. It might have something to do with the fact that flowers don't grow in the desert, but don't quote me on that.

I continued over the outer moat trench through the main gate into the courtyard. A fancy villa stood out among rows of dilapidated brick barracks. The families of Nazi officers stayed there, and my guide informed me that they held a wedding for an officer there. During the concentration camp era. That officer must have found an extremely low maintenance bride, or they were truly living in an ivory tower, totally oblivious to the world.  A Nazi wedding held in a concentration camp, formerly a military barracks named after an Austrian's mother. What a group of romantics.

Eventually I saw the gate with the infamous Nazi motto which is scrawled over every concentration camp in Europe: “Arbeit Macht Frei.” Work makes (one) free. The 'master race' were master liars as well: they even gussied up the nearby Jewish ghetto as a propaganda tool. 'See? We're treating the Jews just fine.'  Only the children's home told the truth through its art and poetry, left behind by dead children. Children were secretly encouraged to express themselves and nurture creativity in a time of crisis and death. Their works were smuggled out of the camp in suitcases, and eventually found their way back to the ghetto to adorn the memorial. Those teachers were heroes.

Down in the basement of the ghetto museum is a small cafe/bistro which serves mostly inedible fast food to the tourists. I'm not sure there should be a snack bar on the site of Nazi atrocity, and I'm also pretty sure they shouldn't be serving hot dogs. What would the Jewish visitors think? But Czech is a porcine country, so why not. Wait. What? No beer at the bistro? In a beer country like Czechia? SWINE.


After leaving the ghetto, I saw the remains of the railway used to transport the Jews on to their final destinations in the extermination camps of Auschwitz and others. I've been to Auschwitz, Dachau and now Terezín. It never gets easier to visit these places, and it never should. I feel that it is very important to remember what heinous crimes we humans as a race, 'master' or otherwise, are capable of  committing when we are at our very worst.

Henke Tour, a Danish tour company operating in the Czech Republic, booked me to photograph Terezín for their website and promotional materials.
Posted by Craig Robinson at 3:45 PM