We started off our portraits in the Paris neighborhood of Montmartre. This is the quarter favored by famous Paris artists, writers and musicians over the centuries. The air was crisp and the sky was blue that day late in October and we ascended Montmartre to the famous Sacre-Coeur Basilica on the top of the hill. There was also a fantastic garden park behind the church which captured our attention for a spell. We did a tremendous amount of walking that day, which is the best way to take advantage of all Paris has to offer.

We had an amazing 8 hour whirlwind portrait tour of Paris (punctuated by occasional cafe stops), which included Pont Alexandre III Bridge, the Louvre, the Arc de Triomphe, Champs-Elysees, and last but not least, the Eiffel Tower.

We finished our shooting day in Paris at sunset and dusk with the Eiffel Tower lighting up the background.

Posted by Craig Robinson at 7:18 PM No comments:

Spontaneously, Ronen and Izabela decided to take a Prazske Benatky (The Prague Venice) Boat Ride on the Kampa Certovka stream, which winds through Kampa and opens up to a gorgeous view of the Charles Bridge and Prague. The small boat was the perfect size for a non-touristy, romantic boat tour of Prague. With the exception of the boat Captain piloting the vessel and me taking photos, the couple had Prague all to themselves in a Venice style boat ride.

For more information about wedding and portrait photography in Prague, please visit my website.
Posted by Craig Robinson at 3:42 PM No comments:

All Hail The Mighty Goat!

THE DAY OF THE GOAT (DEN KOZLA):

BEER, SAUSAGE AND GOATS AT A CZECH BREWERY NEAR PRAGUE.

The first time I saw His Mighty Goatness, His image was plastered on a bottle of Velkepopovicky Kozel Czech Beer. I stared in awe and wonder at the image of this giant black shaggy goat with twisted horns rearing up on his hind legs, clutching a massive foamy beer in his hooves.
I immediately wondered if The Goat was EVIL. I mean, just LOOK at the thing: it reminds me of all the forbidden hard rock album covers of the 70s which would doom my soul to hell if I were to listen to them backwards. Album covers featuring devils, rock stars and goats. I never quite figured out the goat thing, but the Goat certainly scares the bejesus out of millions of fundamentalist Christians each year.

So I grabbed the camera and headed to the brewery in Velke Popovice, a small town where the beer kegs outnumber the residents a million to one.
These are some of the many pagan things I saw at Goatfest 2007:

Beer relay races involving children, empty kegs on
handcarts and empty beer bottles. Hell, my
parents wouldn't even let me run with SCISSORS as a child....

And the mascot, the Great Goat Himself, and MAN does he look WICKED!

Posted by Craig Robinson at 1:08 PM No comments:

I went to a dog show last weekend and took some photos. That's a phrase I never thought I would churn out on my keyboard. For one, I don't own a dog; secondly, I usually photograph weddings and portraits in Europe. Portraits of humans.


But there you have it: after the urging of my Czech girlfriend to come to photograph her walking her dog in front of some judges, I became a dographer (dog+photographer, not on wikipedia yet). 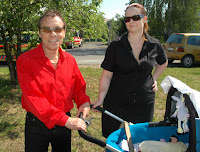 Well, photographing dogs turned out to be a pleasant surprise, mainly because I happened to meet famous Czech photographer Jan Saudek at the dog show. He was just strolling by with his lady and baby. No dog, no camera. Mr. Saudek is not a dographer.


I told him how I admired his work and that it was a pleasure to meet him. He even let me take his photo.

If you haven't heard of Czech photographer Jan Saudek, you have probably seen some of his more 'tame' images on postcards. His work is not for everybody, as it involves nude figures in various odd situations. He uses black and white film and colorizes the final print with subtle blues and tans.

So after tearing myself away from my photographic blubberings with the Famous Photographer, I resumed my dography in earnest.

First and foremost: I took no photos of dogs sniffing other dogs butts, fighting with each other, or all the other things we have all seen dogs do. I try to find the unique moments in every shot I take. However, getting a shot of dogs playing poker was the last thing I expected.

Nor did they hold Japanese tea ceremonies in the park. They were just being, well, dogs. And with a few hundred of them in the park, it was a real miracle that the place wasn't strewn with doggie doo. In fact, I didn't see one doggie land mine the whole time I was there.

Posted by Craig Robinson at 1:26 PM No comments:

Your Portrait Photographer in Prague

A growing trend in recent years is the increase in destination weddings and portraits in exotic locations. Many websites are springing up all over the world offering exotic destinations for weddings and portraits. Among the most popular of these destinations is Prague, Czech Republic. Prague is no stranger to visitors in the last decade; since the fall of communism in the Eastern Bloc countries in the late 1980s, many previously-forbidden cities are now flooded with eager visitors.

Millions of visitors have discovered the fantastic beauty of Prague; and the city's beauty almost seems to be in arrested development compared to the rest of Europe. In a single evening stroll in Prague you can time travel the architecture from the early Gothic period (12th century) through the Art Nouveau (circa 1900). Outer Prague is showing signs of Western modernization with its malls and megaplex cinemas, but the heart of Prague is virtually untouched by the ravages of time.

Many people are discovering that Prague makes a perfect destination for exotic portraits and romantic weddings. Some people get married in Prague while others get married elsewhere and opt to have their wedding portraits taken with beautiful Prague as a backdrop.


Posted by Craig Robinson at 4:20 AM No comments: