Not everyone gets to live in one of the most beautiful cities in the world. But you can, if you want to. In the meantime, you will want to visit Prague. And when you are there, you will be astounded at how beautiful the city is—unless you succumb to heavy overdoses of fine Czech beer and stay in your hotel room for the entire visit. But that's ok too. You'll be back. Kafka says so.

Recently I took Gabriela's portraits in Prague. It was her first trip to Europe and she wanted more than photos from a selfie stick held at arm's length to remember her trip. She wanted the full-on Prague portrait experience, and I was happy to provide this service for her. Prague just can't be beat for the sheer number of beautiful backdrops for portraits—you can chuck a 10 crown coin almost anywhere in Central Prague and get a good shot from the spot where it lands. 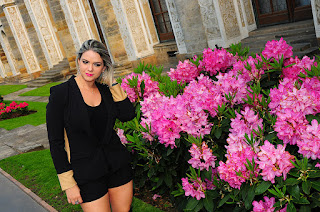 We started in one of my favorite hidden garden spots off the beaten path. Then we worked our way through the gardens and over to Prague Castle. The Prague Castle Steps are a great location to capture the spirit of Prague Mala Strana (Little Quarter) rooftops and classic architecture.

From there we continued down to the river, where we had the most stunning view of Prague, a riverbank, the Charles Bridge and swarms of swans. I timed it to arrive exactly at sunset in order to get the 'sweet light' every photographer craves.

Gabriela was impressed by the orange tint of Prague's ubiquitous street lamps. Where she comes from, all of the street lighting is a dull white. So for a few final shots, I sent her home with memories of the Old Town Square awash in a sea of orange.

For more information about your personalized Prague portrait tour, contact me today!

Take Your Photography to the Next Level in Beautiful Prague


- Do you have a new digital camera that you are having trouble mastering?

- Still trying to figure out the thousands of settings?

- Are you familiar with photography, but need to take it to the next level? 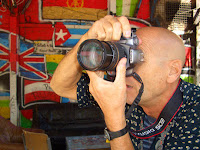 Students meet for a short introductory lecture, than proceed outdoors to photograph in various exciting locations in Prague.  Each student will receive individual instruction and guidance during the workshop. After shooting, we review and critique the photos on a laptop. I have taught these courses for 5 years in Prague and 4 years in Berlin. My students have reported rapid improvement in a very short time.

- No need to book months in advance for a specific date.

- Contact me today to set up your own private or group tour.
- Major discounts for groups; bring your friends and save!
- The photo concepts taught can be used with any camera.

Contact me to set up your photo tour!
Posted by Craig Robinson at 11:37 AM No comments:

Buddha and the Art of Event Photography 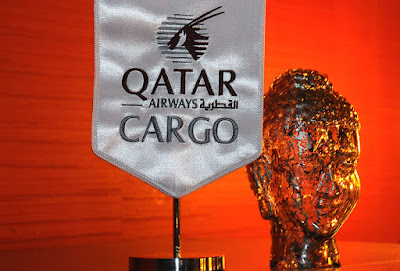 One of the nice things about being a professional event photographer is the wide variety of venues I get to work.  I've photographed cabaret dinner shows in 19th century industrial plants in Berlin and Chinese dancers in Prague's Old Town Square.  Each event I photograph has a new stage set for an evening's interaction of like-minded professionals.

Recently I photographed an event for Qatar Airways in Prague at the Siddharta Cafe in the Buddha Bar Hotel, Prague.  The cargo services division was expanding its scope to include Prague, so an elegant soiree was in order.  A fine international crowd was present, and the festivities began with cocktails and canapés in the sumptuous Siddharta Cafe.  A DJ spun silky grooves with an electronic soft jazz touch.  It made me wonder if the Buddha Lounge Bar music I've heard was composed here.

Buddhas are everything and everywhere  here.  Back-lights and colored statues accentuated the mood of the evening, but what intrigues me most about my event gigs are the odd details.  In a New Age/East-West modern cafe like this, one would expect maybe a massage or an exotic tea/elixir as a welcome.  Instead, a caricature artist plunked his easel down and started drawing guests.  Bushy beards grew to monstrous proportions and shy ladies with giant eyes peered out of his blank canvas.

The artist continued sketching and passing out portraits to happy guests throughout the evening, and I enjoyed my position as one of the blue collar artists plying his trade at the party.

Craig Robinson is a professional photographer with nearly 20 years of experience photographing people and events on two continents.  Contact the photographer today for a quote for your next event in Prague, Berlin or beyond...
Posted by Craig Robinson at 7:42 PM No comments: 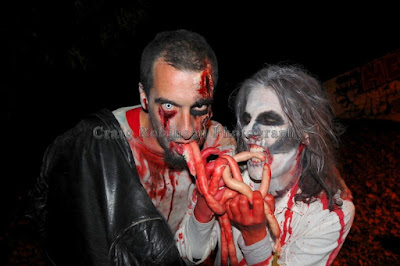 Zombies are HUGE. Once a quiet group, shuffling along in the shadows in search of brain food (fish?), zombies have clawed their way out of their graves and shambled into the spotlight of Tinseltown. You've got your zombie movies, zombie sequels, zombie tv shows, zombie tv show spinoffs, zombie talk shows and even zombie walks. Zombies have eclipsed vampires as the most popular creatures in the underworld—living, dead or undead.

The last time I wrote about mainstream horror films was a story for the Prague Post about the production of (yet) another vampire movie—in this case, Van Helsing, shot in Prague's Barrandov Studios. Being a photographer, my shutter finger twitched nervously through the entire tour of the set. I was not allowed to photograph ANYTHING, which for a photographer-slash-movie-slash-slasher-film-fan-slash-writer, was like a kick in the netherworld. Needless to say, there was nothing top secret to spill: the vampires sucked the blood, the Helsing staked the hearts. During my research I discovered that over 700 vampire films had been made since the days of the first film, making vampires the single most popular monsters in film. Ever. And one of those first films was Nosferatu, a German film made before there was even a modern Germany (it was credited as The Weimar Republic back then).

700 films and 100 years later, people grew tired of all the blood sucking and wanted some good old-fashioned brain munching instead (I think the vampire death knell was the production of sparkly-skinned teen vampire movies). I have the good fortune of being good friends with the originators of the first public zombie walk, which occurred on the streets of my hometown of Sacramento, California in 2001. My good friends at Trash Film Orgy gave me my first taste of zombography, and I've been doing it every time I get a chance. I've photographed zombie walks in Sacramento, Berlin and (for the hat trick) Prague.

If you've got zombie walks, then eventually you're going to get a zombie run. Enter: the Prague 5k Zombie Run on October 31, 2015. While Halloween is not a traditional holiday west of the UK, the organizers of the event must have been hip to all those Halloween movies and the general spookiness of that date. What is a zombie run? Zombies shuffle, right? You can outrun them in a wheelchair, right? Well, as the vampire character developed, so did zombies. Starting with the 28 Days Later film franchise, these rotting dudes could RUN YOU DOWN. They were seriously brain starved and made no bones about it. So on that special spooky day last autumn, I climbed Vitkov Hill to check out the action. 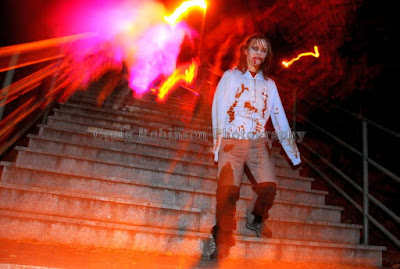 Vitkov Hill separates the districts of Karlin and Žižkov in Prague. From the spearhead of the hill, the third largest equestrian statue in the world gazes over a killer view of Prague from 180 degrees. Mounted upon this giant steed is the one-eyed General Jan Žižka, Protestant Hussite warrior and generous giver of his name to the working class quarter of Žižkov below. Just behind the tremendous haunches of the horse lies a massive mausoleum full of dead commies.  When it is not being just another soviet eyesore, the venue hosts art exhibitions and other cultural events. On All Hallows Eve, Mr Ž was all about the Zs. A 5 km route circled the hill and joggers—some of them dressed as zombies—ran the course. For the joggers not dressed like zombies, special squads of hidden zombies jumped out of the bushes and terrorized them. 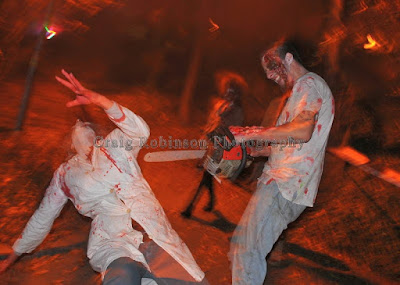 Czechs can really get into the zombie motif. In addition to the various stages of gore makeup, shredded clothing and decomposition, these Zs ate sausage links soaked in ketchup—pulled from the bellies of fallen joggers. In grand Czech tradition, they even washed their meal down with delicious Czech beer. After the brain buffet, the full zombies sat around drinking beer and smoking cigarettes. As Czech zombies do. 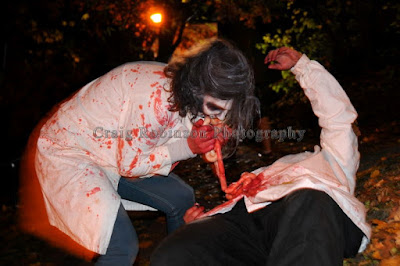 When Craig Robinson is not engaged in zombography, he photographs events, weddings and portraits in Prague, Czech Republic and Berlin, Germany.  Contact the photographer today for a quote.
Posted by Craig Robinson at 12:52 PM No comments: