A Garden Wedding in Prague 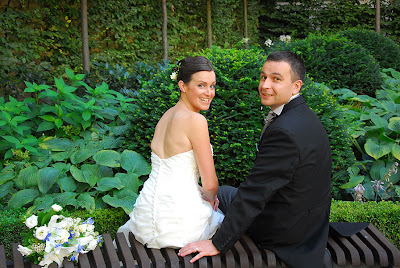 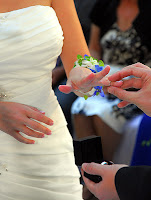 S and C recently got married in the garden of Kempinsky Hotel, Prague.  Since they live in Prague, they decided to avoid the crowded tourist monuments in favor of a more intimate setting.  The garden of the hotel is a huge, lush, green wide open courtyard space behind the hotel and it was the perfect setting for their wedding. 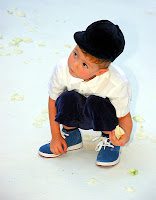 Small children are also a big part of a wedding:  the cute little suits and hats they wear, their patience and best behavior put on just for the day.  I capture the big and small moments of a wedding to show the emotions and overall mood of the day.  A blog doesn't have the space for every wedding photo, but you can get a good idea of my casual, relaxed wedding portrait style as well as my wedding documentary photography in Prague and beyond on my website.

Thanks for taking the time to view my photography.  I hope you enjoyed viewing my photos as much as I enjoyed taking them.  And please feel free to leave a comment! 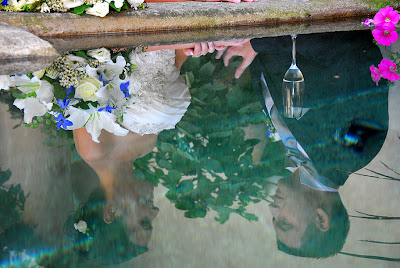 Posted by Craig Robinson at 2:15 PM No comments: 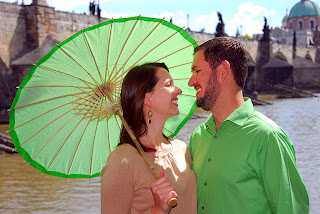 Being from California, I probably have no business using the British slang term for umbrella; and the Texan couple I photographed in Prague last weekend probably wouldn’t know a brolly from a jolly rancher—but hey, I like rhymes.  Or Little Richard.  One of those.

Many couples have hired me for their pre-wedding and engagement portraits in Prague, but few have brought their own umbrellas to the photo shoot.  An umbrella makes a good prop because it is classy, elegant and has nice lines and shapes.  It adds a wide, round shape to the square photo frame, its colors compliment clothing and it is also translucent—which lets the light play.  In addition to capturing emotions and moods, we photographers are playing with light.

It was a very bright, sunny and warm June morning in Prague when Jennifer, Brandon and I set off on foot from their hotel, the Hotel Hoffmeister, situated just below Prague Castle near Malostranska Metro.  From there, we were free to walk through Mala Strana (Little Quarter), or the Castle side of the Charles Bridge.  Many couples like to have their engagement or wedding photos near Charles Bridge, and I have the perfect locations in mind to get the best scenes for a romantic portrait shoot in Prague.  At 10 am the tourist throng was already thickening, but I know the perfect spots to avoid the worst of the crowds—yet still get some amazing shots of most of Prague’s most beautiful sites. 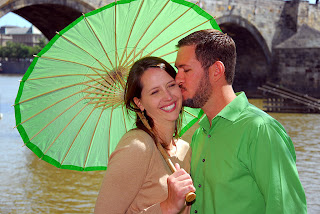 From the banks of the River Vltava, the Charles Bridge spans the river and makes a perfect backdrop.  I also took the couple through Prague Castle and one of the Castle gardens which has yet to be overly visited by tourists.  In the summer time, knowing the best places to work with minimal disturbance is a key to getting natural, relaxed portraits outdoors.

I generally avoid the Old Town Square in the heart of the summer due to the mass of people who are either clamoring to get a glimpse of the Astronomical Clock or dining in one of the many seats outside the Square’s bars and restaurants.  However, I still know a few tricks to eliminate people from appearing in the background of the photos.  One of my tricks is to get a low angle by sitting on the ground and shooting upward toward the subjects; this cuts the tourists out of the scene while leaving the breathtaking rooftops of the Prague architecture.  Add a blue sky and, well, Bob’s your uncle. 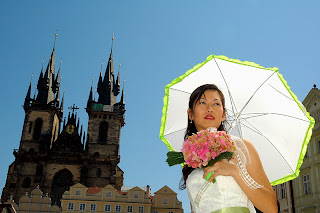 To book your pre-wedding / engagement portraits in Prague, contact me here.  I look forward to working with you!
Posted by Craig Robinson at 12:24 PM No comments: 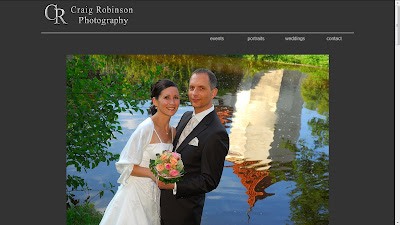 Winter is the time I'm normally catching up on my website work.  Traditionally this has been a time to add the hottest new photos of the past year, and remove some of the photos wherein the people are wearing bell bottoms and Elvis sideburns.  This time around, I'm pleased to announce my entirely new website and domain, a two-in-one jobby which combines praguephotographer.net and berlinphotographer.net into one elegant-yet-simple place:  crphotographer.com.  This time around I am fully designing the site from scratch--no more templates.  I have been learning so much about web design these past years, that I have even designed a site or two as side projects.

I am still based in Berlin and commuting to Prague for winter weddings, portraits and events.  But rather than work on two websites individually, I've decided on one main site where you can see the best work I've done in Europe over the past few years in easy-to-view slideshows.  I've put a lot of time and effort into this new site, so if you happen to find this blog, please check out my new site and let me know what you think.  I am adding to it daily now, so it should be out of beta and into alpha (or is it charlie?) in no time.

As usual, I am available for event photography, weddings, and portraits anywhere in Europe.  Contact me for a quote for your photography project today.  And happy new year!
Posted by Craig Robinson at 4:59 PM No comments: